After more than a decade of getting an average of 5 hours of sleep per night, my body has finally reached its breaking point. I’m currently in the process of reworking my daily schedule to accommodate 8 hours of sleep, meaning I have to stop sleeping at 1AM!

Since I’ve been sleeping earlier, Henry has been informing me about my sleeping habits. Apparently I like to toss and turn and wrestle my blanket. I don’t use my pillows and sometimes I end up laying diagonally on my bed.

Apparently, he finds this hilarious. 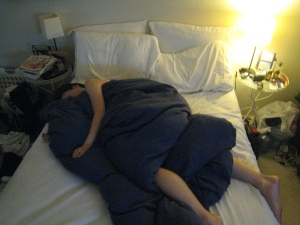