I finally did it. I got LASIK at Feinerman Vision Center. And now I understand why everyone says they wished they got it sooner because that is exactly how I feel. The entire process was about 15 mins long and I felt like I could see better immediately after than I could have before without contacts or glasses. The only discomfort I felt was on the car ride home (in traffic) when the numbing drops started to wear off and I didn’t have any pain medication to take. However, once I got home and popped some ibuprofen and took a nap, I was fine. I spent the weekend in bed and slept more than I’ve ever slept, probably ever.

I do see some halos around lights at night (which is common post surgery), but it is honestly not any different than what I experienced with contacts so it really doesn’t bother me. If this does improve, awesome. If it doesn’t, so be it. I’m just glad that I can now watch TV in bed and not have to get up to take off my contacts before sleeping!

October was a crazy month. My birthday, a wedding, a half marathon, and almost a house! Even though my birthday was at the beginning of the month, we continued the celebration a few weeks later with dinner in LA with B and P.

On the way up to LA, we stopped for lunch at Anaheim Packing District, which is basically a large food court. I love this concept as it allows me to try a variety of things without having to drive to and park at different locations. We circled the entire food court before stopping at our first destination: Kettlebar. In order to not get toooo full, we shared a pan roast and mussels. We continued with two of the most popular items of the whole place: poutine from The Kroft and popsicles from Pop Bar. Given their popularity and the rave reviews, I wasn’t impressed. The poutine was overly salty and I’m just not a big fan of dipped popsicles, or maybe dipped anything. My green tea popsicle had a really bitter taste, his hazelnut was OK. 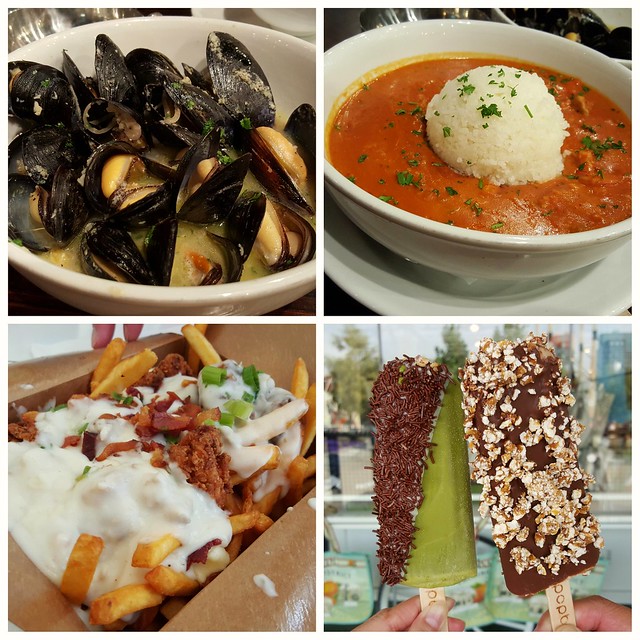 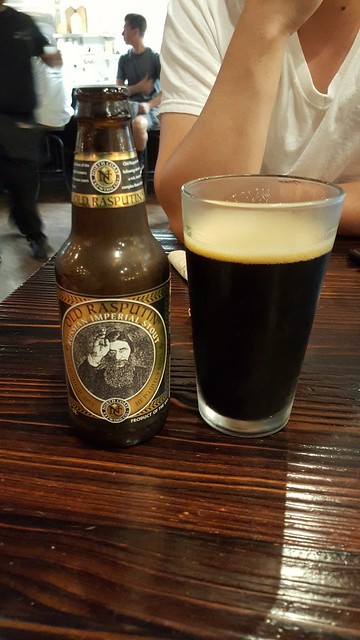 The highlight of our day trip to LA was dinner at Maruhide Uni Club, which I’ve wanted to try for a while now. If you love uni like I do, this is the place for you! They have uni EVERYTHING! B & P recommended the uni club don and uni cream pasta. The uni club don even came with soup that had pieces of uni in it. We were really tempted to bring some uni home but decided against it. SD has some pretty good uni options anyway. 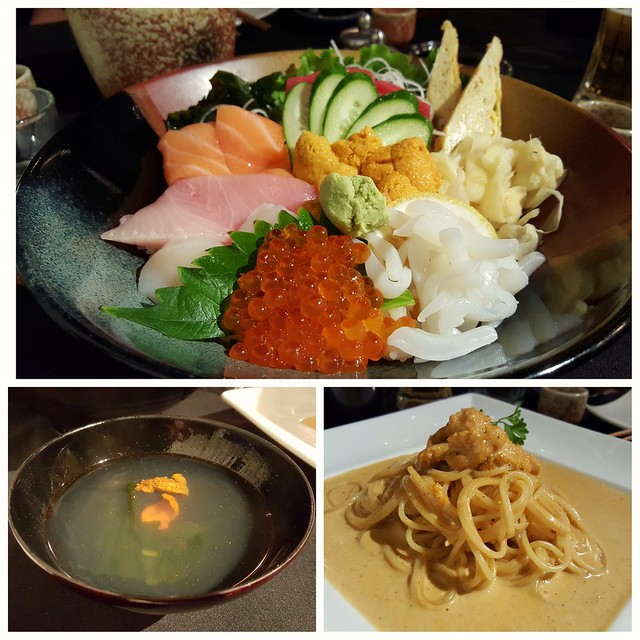 We ended the night by checking off another place on my must try list: HoneyMee. The ice cream is good on its own and the honeycomb adds just the right amount of sweetness. The green tea milkshake is delicious as well! 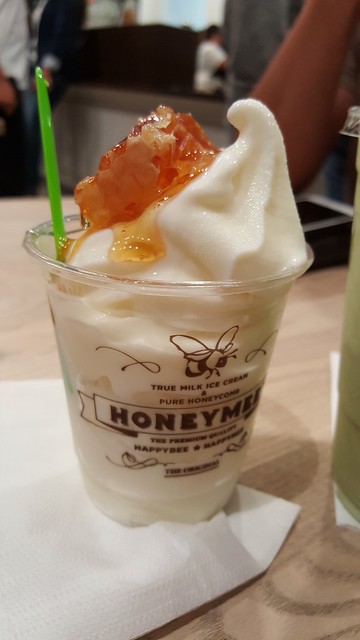 I opened a Disney credit card in 2007. I can’t tell you why because I honestly don’t remember myself; I was never a Disney fanatic. Over the years, I accumulated more than 400 Disney Dollars. It wasn’t until I researched the redemption policy that I find out I could use my Disney Dollars at Disney restaurants. I chose Napa Rose.

Inside Napa Rose, there is a lounge, main dining area, Dessert Counter and Chef’s Counter. The Dessert Counter seats about 4 to 5 people and is off to the right of the kitchen overlooking the preparation of desserts. The Chef’s Counter is split by the service counter (see picture below); each side seating 4. Diners sitting on the left facing the kitchen have a view of appetizers being made while diners on the right get to see the main course action unfold. Because of the extended experience, there are only two seatings per night at the Chef’s Counter/Dessert Counter, 5:30PM and 8:30PM.

To snag seats at the Chef’s Counter, I made a reservation a month in advance for a 5:30PM seating. Henry and I were excited to celebrate our 5 year anniversary with a “free” dinner (thank you Disney Dollars)!!

I. WAS. LIVID.
THANKS FOR RUINING OUR ANNIVERSARY ASSHOLE!!!!

The Chef’s Counter was completely booked that night so the only thing the manager could do was offer us seats in the main dining area. I contemplated just walking out and going home, but I remembered that I had expiring Disney Dollars to use so I reluctantly accepted.

After being seated, we placed our order fairly quickly since we agreed beforehand that we would order the “Vintner’s Table” (Chef’s Four Course Tasting Menu). I didn’t have a chance to be my usual indecisive self!

My anger began to subside as we finished our first course and it all but disappeared by the time dessert was served. Instead of sulking the whole night, I actually enjoyed my meal. Every dish was well executed and delicious. I especially loved the pairing of goat cheese doughnuts and “pear soup” (I told you I love hot + cold).

At the beginning of the night, given the reservation drama, I was sure we would never, ever, ever come back to Napa Rose… EVER. At the end of the night, I was willing to come back and pay for our meal!

…And come back we did. Less than a month later! Yes, mostly for the food, but also because Napa Rose comped our first meal in attempt to make things right – we only paid for Henry’s wine pairing, tax, and tip (based on full dinner amount, of course). That meant I still had expiring Disney Dollars to use.

For our second visit, I was only able to reserve seats at the Dessert Counter.

View from the Dessert Counter

See the empty seats on left? That’s the Chef’s Counter. Since all 4 of those seats were empty and it was well past 6PM, I asked Sous Chef Gloria what the deal was. After speaking with the manager, she explained that the party cancelled and offered us the seats. HELL YEA! Not only did our view get upgraded, Sous Chef Gloria also told us about another tasting menu, one in which you relinquish control of your meal over to the chefs; we had no idea what our next course would be. This option had more, smaller portion courses and costs the same as the “Vintner’s Table”. I highly recommend it if you are able to sit at the Chef’s Counter.

View from the Chef’s Counter

We LOVED every dish, but the highlight of our meal had to be the mushroom soup. AMAZING. The “Best Hot Chocolate” was a close second 🙂 I can’t wait to return for another meal.