I ran my first half marathon!

My goal was a 10 minute pace, which is not at all unreasonable. I’m comfortable running a 5K distance so two weeks before the half marathon, I increased my distance to 6 miles and then to 10 miles the week before. I had planned to run about 12 miles on Friday, rest and carb up on Saturday in preparation for the half marathon on Sunday. When I started my run on Friday, I noticed sharp pain and tightness in my right calf. I thought I could just run it off, but I wasn’t able to make it out of my driveway (I have a long driveway :P)! I spent the rest of Friday and the whole day Saturday drinking lots of water and stretching out my calf. By the time Sunday came around, I wasn’t 100%, but at least I was able to run. I tried to maintain my usual pace, but I had to slow down when I felt my calf tightening up.

Considering I wasn’t sure if I would be able to run two days before the race, I’m satisfied with my time. There’s definitely room for improvement!

I woke up at 7AM and rushed to Staples Center to run the 2012 LA Kings 5K. My one week of training prepared me enough to finish almost 2 minutes faster than last year’s time. I crossed the finish line in 26:34, which averages to an 8:34 pace. What my training did not prepare me for was having to run 3.1 miles IN THE RAIN. It wasn’t light sprinkles, IT WAS RAIN. Needless to say, I was soaked afterward.

There was no time to chill and hang out at the event because I had to take my last GMAT practice CAT and Henry had groomsman duties to attend to. I completed my test at 2PM, which left me with only half an hour to get ready for the wedding! I didn’t even have time to eat! 😦

Things finally settled down once I arrived at the wedding venue: Muckenthaler Mansion in Fullerton. 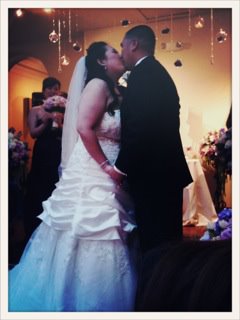 The ceremony went off without a hitch and the meatballs served during cocktail hour were DELISH! I was so hungry I ate 8 of them!!! 😀

Although I had fun celebrating with friends, weddings, in general, give me anxiety. Personally, I would rather skip the wedding and go straight to the honeymoon – I’m working on getting everybody else on board with that idea. So far, my mom, who’s opinion is obviously most important, said she’s fine with me not having a wedding. Hopefully she’s not lying to me…

I didn’t train at all for the LA Kings 5K, which is exactly why I am hurting all over right now. Most of you are smart enough not to follow my example, but just to be clear… I WAS STUPID. I SHOULD HAVE TRAINED.

Anyway, for not being prepared and for this being my first 5k, I think I did OK. I finished in about 28 minutes, which averages to 9 min pace. Obviously, I wasn’t even close to winning the race, but I know that with the right training, I can definitely improve my time for my next 5k.

That’s Henry crossing the finish line. He really didn’t want to run, but I made him 🙂

Why hello, Luongo. So nice of you to show up at an LA Kings event.

This little kid was just a taste of what I would see later that afternoon at the Kings vs Canucks game: A sea of fucking blue jerseys. Where the hell did all these Canucks fans come from???? I’d say that Staples was filled with 70/30 Canucks! Bullshit.

You know what else was bullshit? The officiating. Bad calls on both sides. But the non-call that led to D. Sedin goal pissed me off the most, obviously, since it was the game winning goal. The Kings really couldn’t recover from that, especially Doughty, who just completely went bat shit crazy and got a stupid diving penalty. Good thing the Canucks PP was just as horrible as the Kings PP or else the final score would have been a lot different.

It was a physical game right from the start. Both teams were playing like they had tiger blood and Adonis DNA. Well… except for H. Sedin, who pouted like a little baby after a high stick from Doughty. Look Henrik, suck it up until you’ve had a few pucks to the face like your brother and your old friend Willie Mitchell. They kept replaying this bit on the jumbotron, in slow motion! I totally wish I took a picture. Damnit.

Henry and I registered for LA Kings 5K on March 5th. With registration, you receive a t-shirt and tickets to a game of your choice (Vancouver, Dallas or St. Louis). Of course, I chose the Canucks game!

So… I guess I have to start running again, huh? Perhaps buying new running shoes will give me some motivation. The ones I have right now are about 4 years old. Yea, it’s due time. I’m thinking about these: 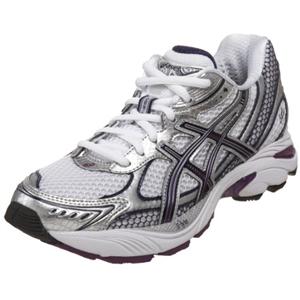