I don’t consider myself a picky eater, but there are certain foods I will not eat.

And for the longest time, avocados were the list. Why? I’m really not sure. I just… didn’t like them!

Call it a maturing palate, reevaluation of life, whatever, but in this past year, I seem to have forgotten my dislike of avocados. I ordered a salad with avocado. Not bad. I ate poke with avocado. Pretty good. Now I’m adding avocados to breakfast, lunch, and dinner! Love!

Unlike celery and cilantro, avocados don’t have a strong flavor; they won’t overpower a dish, ever. The creamy texture provides a richness that is a perfect substitute for butter and mayo. I guess you can say the same for peas, but I’m not ready for that yet. Baby steps… 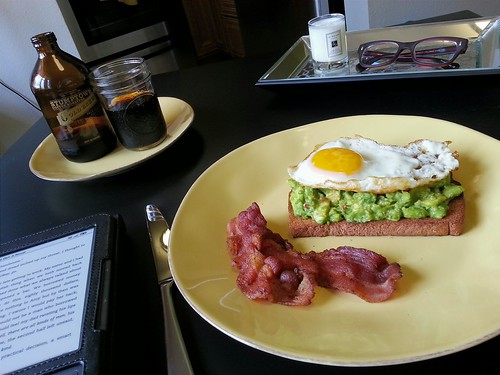 We can’t be afraid of change. You may feel very secure in the pond that you are in, but if you never venture out of it, you will never know that there is such a thing as an ocean, a sea. Holding onto something that is good for you now, may be the very reason why you don’t have something better. – C. JoyBell C.

The past year has been a time of change for me. Physically, mentally, emotionally.

I kicked off the year by continuing my pursuit of becoming fit and living a more healthy lifestyle. I achieved this through…

my new-found obsession with inversions (and love for yoga)

training for and running my FIRST marathon in Seattle (RnR)

Getting back into shape wasn’t the biggest change of the year. It was moving down to San Diego for work.

Despite the positives of living in San Diego, I’ve had a hard time adjusting. It’s been four months and I still don’t feel connected to my new home. Every chance I get, I go back to LA to see my family, friends and Henry. There is nothing that keeps me in SD. Nothing. It could have been an easier transition if I had a friend here who had an established social circle that he/she could introduce me to. Or maybe if I lived in the same area as most of my coworkers.

Before I made the move, I thought I would love living alone. I envisioned Bruce Willis screaming out “Freedom” in Braveheart. Um, negatory. Living alone SUCKS, especially after living with someone for the past 7 years. Living alone doesn’t lessen responsibilities, it increases them tenfold.

And while this whole experience has been mostly a pain, I owed it to myself to live alone at least once in my life. I needed to understand what it was like to not rely on anyone, to do things myself and for myself. Because only then would I be able to truly appreciate cohabitation with Henry. It’s kind of like how you need to learn to love yourself before loving others 🙂

Speaking of Henry, we got past the “seven year itch”. Barely. We were broken up for a bit. Our relationship had been on cruise control for the past few years and as a result we got too comfortable. We mistook living with each other as spending quality time together. It’s not. We also mistook talking to each other because we lived together as communication. It’s not. So as painful as it was, having that short time apart was a good thing for us because we learned these important lessons.

As if making a big move, transitioning to a new job, and going through relationship issues weren’t enough to deal with, I had a health scare about a month ago. I found 3 enlarged nodes in my neck. After an ultrasound and 11 vials of blood (9 in one day!), my Dr. said that it’s likely not cancer or anything serious. I’ll continue to monitor the nodes and decide in a month or so whether I should go forward and get a biopsy… just in case.

In an attempt to eat “healthy” and cut out carbs at night, we made our version of thai beef salad over the weekend. I say attempt because this recipe does have a good amount of sodium, so we are going to try to balance this out by monitoring our sodium intake throughout the day.

(mint and cilantro can also be incorporated; I just don’t like either :))

Directions:
1. In a large bowl, stir together green onions, basil, lemon grass, thai chilis, lime juice, fish sauce, sweet chili sauce, garlic chili sauce and sugar. Adjust flavor, if necessary. Set aside.
2. Trim off excess fat around the beef, leaving about an 1/8 inch. Put beef into a ziplock bag and pour in about 1/2 of the fish sauce mixture (or just enough to coat the beef). Marinade for an hour in the refrigerator.
3. Remove from refrigerator and allow to rest at room temperature for 10 minutes. Brush beef with canola oil before placing on broiling rack and broil for approximately 4-5 minutes on each side, or until medium/medium-well. Let beef cool for 10-15 minutes before cutting into thin strips ACROSS THE GRAIN.
4. Combine lettuce, tomatoes, cucumbers and beef strips. Add as much of the reserved fish sauce mixture as you’d like (a little really does go a long way). Toss and serve.

This recipe also works on the grill, but I actually prefer the broiler in terms of taste and it is also less time-consuming than the grill.