In my almost 30 years of existence, I’ve only made pancakes twice. The first was for an ex, who I was trying to surprise with breakfast in bed. I forgot the occasion (valentine’s birthiversary or whatever), but it doesn’t matter because the pancakes were terrible. Just God awful. Needless to say, I didn’t exactly rush to try again.

As I browsed the internet for breakfast recipes last week, I came across a recipe for flourless pancakes. And the best part? Only 2 ingredients: eggs and a banana! Sold! 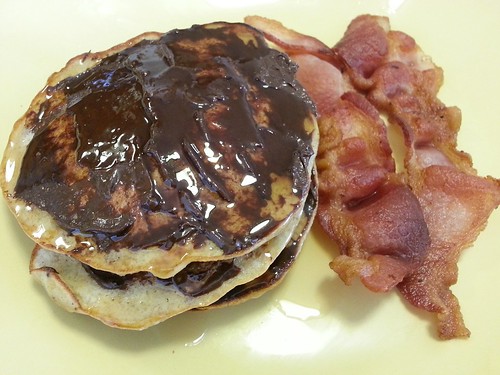 Ok, so I did tweak the recipe a bit. I added powdered peanut butter and ground cinnamon into the “batter” and then opted to smear TJ Speculoos & Cocoa Swirl instead of light butter. Can’t make it too healthy, ya know?

Tupperware Tuesday, a real look at the food I make each week. No fancy cameras, no lightbox contraption, no perfect angles. Just what’s for lunch.

OK, I know. Bringing breakfast, lunch, and dinner? I should just blow up an air mattress and sleep here! Seriously.

Last week, I attempted to do Whole 30, but failed miserably due to poor planning. When you’ve lived your whole life in non-compliance, it’s hard to turn that around in one day. But that’s my problem, I guess. I commit to things too easily and without much thought.

So instead of Whole 30, I browsed the internet for Paleo-friendly meals…

I finally broke out my Paderno Spiral Vegetable Slicer. Yes, it’s been 10 months… This baby is seriously the best thing EVER! SO easy to use. SO easy to clean. And the best part is, I don’t even miss REAL pasta!

OK, I know the stew looks like shit, but let me assure you, it is delicious! And it tasted better the next day after reheating. This pretty much applies to all stews. It’s basically science (and good eats!). Alton Brown said so.

I’ve been craving burgers lately. Like, a lot. Apparently, eating In-N-Out on the weekends while watching playoff hockey has not been enough. I NEED MOREEEE BURGERS!!! So on one of my off Fridays, Henry and I headed to DLTA to try UMAMIcatessen, a food-court-esque eatery, which houses UMAMI Burger (yes, I’m totally stating the obvious :P). Having never eaten at UMAMI, we both wanted to see if the burgers were worth all the hype.

As we looked over the menu, we knew we had to try their signature burger, the Umami Burger. Choosing our 2nd burger was tough. We were interested in both the Manly and Hatch Burgers. This was a battle of bacon vs. chiles, which we both LOVE, but ultimately, bacon won, as it always does. Always.

We ordered the burgers medium rare, as suggested by our waiter, but when we split the burgers, the patties looked more like medium, almost medium-well. I couldn’t really complain because the burgers were actually incredibly tender and juicy.

To my surprise, I liked the Manly burger a lot more than the Umami. Simply put, the Manly is a high end, refined version of a Western Bacon Cheeseburger. I really enjoyed the combination of smoky + sweet and the contrast in texture provided by the fried onion. Unfortunately, I was not impressed with the Umami Burger. The flavors just didn’t mesh well and I did not care for the roasted tomato or the Umami ketchup. Am I only one??!! I’ve read many reviews raving about the ketchup.

In addition to the burgers, we also ordered two sides. If you love potatoes as much as I do, you must order the smushed potatoes. Starchy, salty goodness! And if you’ve never had pig ears and are feeling adventurous, I recommend the crispy pig ears; they’re a great alternative to fries.

I gotta say, even though UMAMI is a burger joint, I was most excited about dessert. I love foie gras and I love doughnuts so the FG&J sounded amazing on paper. After a lengthy wait (longer than we waited for our burgers), I took one bite and was immediately turned off. My taste buds were so confused – the delicate flavor of the foie gras mixed with the tartness of the jam just didn’t make sense in my mouth. It was such a shame because the doughnut itself was quite good!

We usually pack up our snowboards and gear in April, but this year, the stars aligned (MVP12 season pass + cheap condo) and we spent this past weekend in Mammoth with a couple of friends.

Henry and I wanted to shop for groceries before we left for Mammoth so we had to make a game time decision on what to make for dinner (breakfast is so much more simple!). Our friends suggested pasta and the first thing that popped into my head was spaghetti bolognese. I totally would have went with that if I hadn’t made it for lunch earlier in the week; my stomach just can’t handle that much acidity 😦 So, we went with mac n’ cheese instead. You can’t go wrong with mac n’ cheese, am I right??

Directions:
1. Cook pasta in large pot; drain.
2. While pasta cooks, cut bacon into small pieces and cook in large non-stick skillet over medium heat until crisp. Remove bacon from pan and place onto paper towel covered plate. Reserve about half of bacon drippings.
3. Increase heat to medium-high. Season chicken with salt and pepper. Add chicken to bacon drippings and cook until browned and done (about 5-6 minutes).
4. In medium size bowl, combine milk and cream of mushroom soup. Set aside.
5. Melt butter in large saucepan over medium heat. Whisk in flour and cook for 2 minutes.
6. Gradually add milk/soup mixture and stir with whisk. Bring to a boil and cook until thick. Turn heat down to low and let sit for a few minutes.
7. Add Italian cheese blend and Parmesan cheese, onion powder, garlic powder and salt. Stir until cheese is melted.
8. Preheat boiler.
9. Coat baking dish with cooking spray. Pour in the pasta, chicken, bacon and cheese sauce. Mix together so that the sauce is well incorporated. Sprinkle evenly Colby-Jack.
10. Broil for 3 minutes or until the Colby-Jack cheese is melted.

We made two containers full and that was all that was left. Proof that you can never go wrong with mac n’ cheese… especially when bacon is involved.

I’ve also made this recipe with chicken breast and it tasted just as good. If you want a more high-end mac n’ cheese, substitute the Italian cheese blend with a combination of smoked Fontina and smoked Gouda – they’ll definitely take the mac n’ cheese to another level of deliciousness!!!!

For my 4th dineLA experience, I opted for lunch since we had just spent $$$$ on what will surely be one of the most memorable meals of 2010: Petrossian.

Since Cube was fresh in my mind after reading about it recently, I looked up their menu for dineLA and quickly began to salivate. Braised maple bacon and truffle burger? SOLD! We made reservations for a rainy Friday afternoon, which in retrospect, was a poor decision on my part since traffic is RIDICULOUS in all directions on Fridays + it was raining. We arrived at noon, 30 mins late for our reservation (we called to let them know), and the place was practically empty at that time. People began trickling in after we were seated and by the time we left, there weren’t any tables available.

I knew what I wanted to order off of the dineLA menu, but as I was browsing through the regular menu, I saw mac and cheese and I just couldn’t resist. What can I say… I’m such a sucker for mac and cheese! After we placed our order, the chef sent out an amuse bouche of adelegger cheese, from Germany. Bold with a similar nutty flavor like parmigiano-reggiano. Our first courses were braised maple bacon (of course!) and spicy tuscan bean and sausage soup. The bacon (pork belly) was cooked properly and the celery root puree provided a nice balance to the sweetness of the maple. The soup took on all the great flavors of the sausage and the greens made me feel like I was actually eating, (gasp), healthy. The soup was so comforting, perfect for a rainy day. Our appetizers made us really excited for the rest of the meal.

For our entrees, we ordered the truffle burger and the lamb panini. When the waiter took our order, he asked if we wanted blue cheese on our burger. He didn’t give us an alternative and I figured why not just try the burger as it was originally prepared: with blue cheese. I’m not the biggest fan of blue cheese since it is so strong, but I can tolerate it. When I took my first bite, I immediately regretted my decision. The blue cheese totally overpowered the entire burger; all I could taste was blue cheese. I found myself trying to scrape off the blue cheese in attempt to save the burger. I don’t feel like I can give an accurate review of the burger since I was so overwhelmed by the blue cheese. The lamb panini was .. ok. I didn’t hate it, but I didn’t love it either. It tasted like really dry roast beef. In fact, it was so dry, the au jus didn’t even help moisten it much.

My first impression of the mac & cheese was that it looked like school cafeteria mac and cheese (except for the garlic on top). It didn’t taste much better either. Plain, boring and seriously lacking in flavor. Although, I have to say, the balsamic was a nice touch. This was not worth $7.

Our desserts were more enjoyable. We had the seasonal fruit cobbler duo (cherry and rhubarb) and pots de creme duo (butterscotch and valhrona chocolate). The cobblers were too sweet for my taste, although the ice cream did help cut the sweetness somewhat. I absolutely LOVED the butterscotch creme, but the chocolate creme was extremely bitter; it must have been >70% cacao.

Overall, I was disappointed. I can see how others would like this restaurant, but the food at Cube Marketplace just didn’t mesh well with my tastes/preferences.